What is a Branded Fare?

Branded Fares are airline fares that are combined with ancillaries, such as baggage or meals, and bundled together into one product offering. Each product is priced differently and has specific services included within it, making it more enticing than just an airline ticket. Every airline creates their own line of Branded Fares depending on their pricing strategy and possible offerings. Branded Fares are tiered, starting with a base level product (usually referred to as an unbranded fare). Each tier builds on the unbranded fare and adds services and ancillaries depending on the tier and price.

The below image shows a breakdown of Branded Fares. 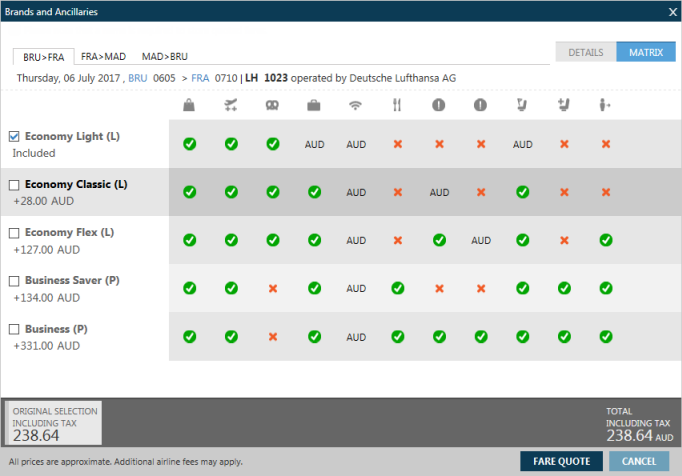 What are Fare Families?

Where Branded Fares are seen as an upsell, or an adding of additional products to an existing fare, Fare Families refer to a tiered system under which each airline classifies their different fare types. Basically, any fare from any Fare Family can become a Branded Fare as a means of upselling an already existing product.

In the above image, the Fare Family is European destinations.

Another term you may have come across is a Brand Modifier. Brand Modifiers are the codes that indicate the tier level within the Fare Family. While QuickTrip does not use Brand Modifiers, this is a common term used in the travel industry.

The below image is an example of a Brand Modifier.